Boats are one of the types of vehicle players can design and operate for their sea rescue service in Stormworks: Build and Rescue.

Overview of building a boat[]

Stormworks provides a starter boat preset which can be loaded in the editor to save time, or you can continue reading to learn how to make your own from scratch.

The most important component of a typical boat is to ensure that it has a large enclosed area within the hull. This is typically below the main deck. It often contains the engine(s) for the vehicle. In overly simple terms, the amount of enclosed space in this area determines how much weight your boat can hold (its maximum displacement) - meaning how much weight the ship can carry before it starts to sink. If there is a 'hole' in this part of the ship, the boat will usually immediately sink when spawned in-game because it cannot hold its own weight.

Note that engines tend to be quite heavy and can easily shift a boat's center of mass. It's recommended to keep engines as close to the bottom of the hull as possible to improve stability and to make it easier to flip back upright if does capsize.

Engines by themselves generate power, but converting that power into forward (and backward) movement requires propellers. 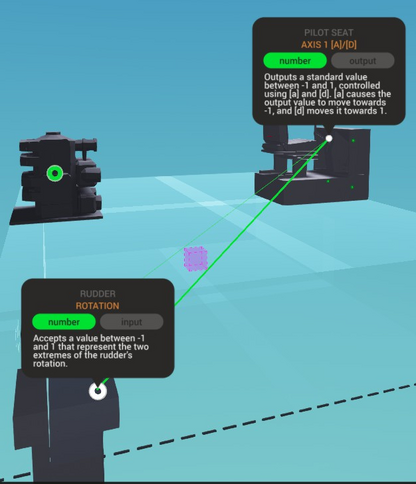 Boat steering can be done in a variety of ways. Rudders are among the easiest approach, though thrust pivoting, unequal propulsion, and lateral propulsion are all options as well.

Rudders allow the boat to turn by directing water to the sides of the boat as the boat moves forwards. This is their key limitation: they only work when the boat is moving forwards (or backwards). For boats that need to perform sharp turns or sometimes maneuver sideways, rudders are insufficient.

Normal rudders (not fin rudder) should be placed with the blocks at the top (on the underside of the boat) with the 'thin end' of the rudder pointing towards the back of the boat. In the Logic Data screen, rudders need to be connected to the A/D node of the pilot seat.

Rudders are often installed in a pair, with one at either side of the back of the boat (port and starboard). Note that if you use the symmetry tool when placing the rudders, they will counteract each other by trying to turn in opposite directions (as the symmetry tool flips them). They must be placed individually or else a separate logic arrangement to negate the turning instructions must be provided to one of the rudders.

The built-in preset Starter Boat uses thrust pivoting. The engines at the back turn from one side to the other to steer the boat, causing their center of thrust to end up on different sides of the boat's center of mass, resulting in a yawing force. Similarly, according to its description, the azimuth thruster is intended for use on a robotic pivot so that it can provide lateral thrust to allow a ship to move sideways or turn sharply. Fluid jets can work similarly, using thrust deflectors to provide lateral force for turning.

On a ship with at least two propellers, thrust on one propeller can be reduced, eliminated, or even reversed while the other propeller will both push the ship forward and turn it. With gearboxes or electric motors used to allow one propeller to reverse while the other goes forward, a ship can more or less turn on a dime.

Some large real-life ships have side-oriented propellers to allow them to move sideways towards a dock. These can also be used for turning if they are offset from the center of mass.

A control seat (often a pilot seat or helm) is the easiest way of setting up controls for a simple boat, although various throttles and buttons for control can be more satisfying.

Using the Select Tool, the pilot seat's Hotkey 1 can be set from 'push' to 'toggle' and used to control the on/off state of the engines. In the Logic Data screen, drag Hotkey 1 to the Engine On/Off node to connect it, then press '1' when in game to start the engines. 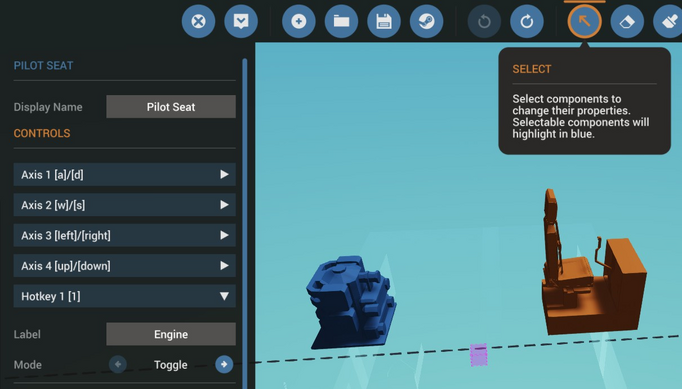 Capsizing refers to when a ship gets flipped upside down and can't recover. It is possible to design ships which cannot capsize and will automatically self-right even if turned completely upside down, such as submarines. Ships can also be designed with a variety of active measures to counteract being capsized.

Since capsizing always starts with tipping too far to one side, a common approach to prevent it is to improve stability.

Ships may tip to one side ('list') when their center-of-mass is not directly below the center of the vehicle (center of buoyancy), increasing their risk of capsizing. This is most commonly a problem when heavy cargo on the vehicle is lopsided. Heavy cargo should be kept low and either centered or balanced with an equal weight of heavy cargo on the other side.

If you have to deal with cargo sometimes causing your ship to tip to one side or the other, consider adding ballast tanks to each side of your ship. These can be filled with water to counterbalance any unequal roll forces, allowing you to correct the situation before the ship can be capsized. Note that ballast tanks fill/empty slowly and are not suitable for managing wave-induced roll (this requires dynamic stability).

Dynamic stability is used for managing roll that occurs primarily due to waves. All dynamic stability methods require either a microcontroller or PID controller. A variety of methods can be used:

A well-designed ship can passively recover from being flipped upside down, like a submarine. To do this, the overall shape of the ship generally needs to either be round (like a submarine), or tall and flat-sided. In either case, the center of mass needs to be kept below the waterline to ensure that the ship will orient itself correctly, and the lower it is, the better. A ship with tall ceilings and large (enclosed!) empty rooms above the waterline has a significant advantage in getting itself turned upright.

The easiest approach to test if a ship is able to passively recover is as follows:

If a ship has capsized, there are a variety of design options which can be installed to allow it to flip itself upright again.

If your boat immediately sinks, you may have a gap in your hull somewhere. Hull compartments which are not fully closed can instantly fill with water, so they offer no buoyancy, and water can get in even if the hole itself is not below water. In contrast, open doors and hatches will fill slowly, and only when they are below water. An easy test for this is to put a fluid meter inside of the compartment and check the fluid capacity - if it comes back zero, the compartment is not sealed and you'll need to close the hole.

If your compartments are sealed but the ship is still sinking immediately upon spawn, it may be overburdened. This can be an issue when using extremely heavy components along with filling large amounts of your ship with cargo, like fuel on a tanker. Ensure you have enough volume filled with air to keep your ship afloat.

Common requirements for a boat:

A catamaran is made up of two hulls which touch the water. They tend to be very stable, making them less likely to flip. On the other hand, when they do flip they are much harder to upright. Catamaran examples can be found on Wikipedia[1].

A hydrofoil is a type of high-speed boat which has control surfaces below the waterline. These surfaces are used to provide enough lift to get the boat entirely out of the water, resting only on the hydrofoils to minimize drag. Hydrofoil examples can be found on Wikipedia[2].